For the 10th seriesEntering the 10th anniversary!
There is no limit to my stomach!Autumn appetite satisfies Goro!
TV Tokyo boastsA historic late-night food drama
“Lonely Gourmet Season 10”
Airing on Drama 24 from October 7 (Friday)!

Pronoun “drama 24” of TV TOKYO Friday midnight producing many topical works.
The popular food documentary drama “Lonely Gourmet Season 10” starring Yutaka Matsushige, which is celebrating its 10th anniversary, will air from 12:42 a.m. on Friday, October 7!
* Episode 2 and more will air every Friday at 12:12 a.m.!
This work is a drama based on the popular comic of the same name by Masayuki Kusumi and Jiro Taniguchi. A food documentary drama depicting the wonderful moment when the main character, Goro Inogashira (Yutaka Matsushige), who runs an imported general merchandise business, stops at a restaurant he finds at his workplace and freely eats what he wants to eat. In January 2012, as soon as the show started quietly at midnight, Goro’s appetizing dishes and bold “eating” and “warm voice” performed by Yutaka Matsushige became a hot topic, and many people were hooked!
After last year’s “Season 9”, this year will also be a drama series.

This time, the 10th episode of the series, you can enjoy the feeling of traveling from a popular restaurant you visit in a high-class residential area in Tokyo, enjoy the food culture of foreign countries, and even choose a meal at most quick. Restaurants offering exquisite gourmet cuisine that will satisfy Goro’s stomach and heart, such as luxurious seafood dishes that will grip your stomach, will appear one after another!
The 10th anniversary of the memorable series, and the new series of “10” in cool October.

Pay attention to the type of town Goro will encounter, the type of exquisite gourmet cuisine, and the unexpected guest artists.
Please enjoy “Autumn of Appetite / Long Nights of Autumn”.

Q: “Lonely Gourmet Series” is finally the 10th drama series.
Again, let us know how you felt when you learned of the decision to air Season 10.

This is an important step.
Is it “ten”, “ten” or “X”? I bite the weight of the number called two digits.

Q: Tell us about your enthusiasm for “Kodoku no Gourmet Sesason 10”.

I heard that many similar programs have come and gone.
From the beginning, we had no “enthusiasm”, so I think it continued.

Q: Finally, please pass on a message to viewers who are eagerly awaiting the broadcast.

I’m in the middle of filming right now, and even after 10 years, I’m still finding delicious restaurants.
I’m looking forward to this place more than anything, as I myself have cut back on restaurant meals drastically.
I don’t know what to say about the hem, but please take a look.

It’s been 10 years since the program started, 10 works as a season, and a series of 10 cool in October.
The first broadcast date will also begin on October 7, and it will begin auspiciously with Lucky Seven!
There are signs that something is about to happen, but there is a “lonely foodie” as usual, all the staff are looking for delicious restaurants sleeping around town. I’m thinking about what I can do for the 10th anniversary, but most of all, I’ll “finish the race, finish the meal” with Mr. Matsushige and the directing team until the last episode. This year, I’ll prepare my stomach and rise to the challenge so I can deliver the shops and treats I want to see!
Please look forward to the final episode to see if the plan will come to fruition as an accompaniment to the long autumn nights. PS Sorry if you are frustrated.

The poster art for “Kodoku no Gourmet Season 10” is now complete! 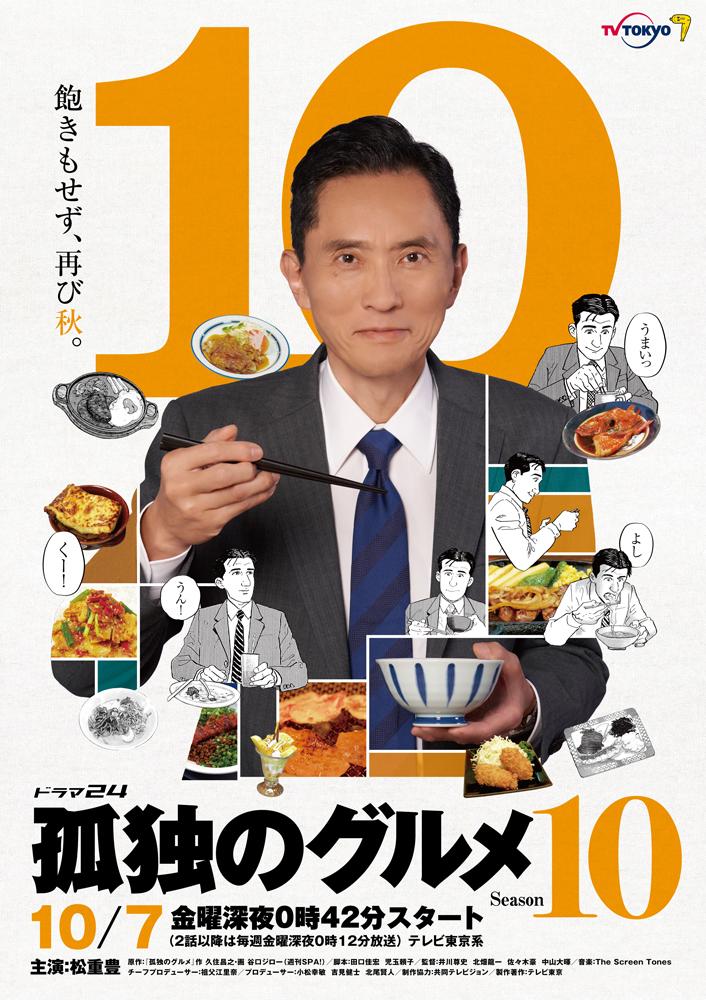 Surrounded by many gourmet dishes, Mr. Goro watches with a strong gaze.
While wearing a big “10” fitting for the series’ 10th anniversary, which heralds “the autumn of loneliness” rather than the autumn of appetite, the visuals are full of gourmet taste!

in addition! The broadcast of past “Lonely Gourmet” series has also been decided!

The long-awaited “Season 10” will begin, and in order to animate the 10 years of the program, the distribution of past works will be decided this fall!
From Season 1 to Season 9, we will be rebroadcasting all episodes for approximately six months!
First of all, the Season 1 replay will start from 5:30 PM on September 15 (Thursday)!
The first memorable episode is[Yakitori et Yakimeshi à Monzen Nakacho, Koto Ward].
Enjoy the city’s nostalgic scenery and exquisite gourmet cuisine again! 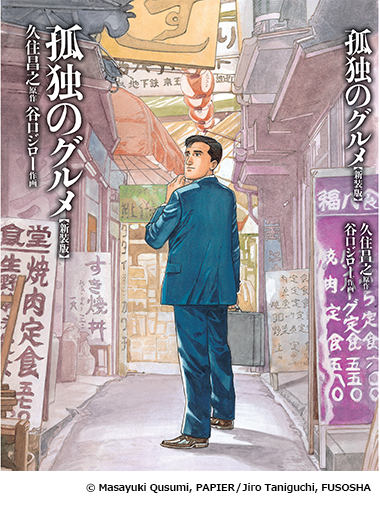 “Lonely Gourmet” Original/Masayuki Kusumi/Illustration/Jiro Taniguchi (Weekly SPA!)
It was serialized in “Monthly PANJA” from 1994 to 1996 and published in book form in 1997.
It was serialized irregularly in “Weekly SPA!” from 2008 to 2015, and became a long-selling series with a total circulation of over 1.5 million copies.
(*As of Wednesday, September 7, 2022. Cumulative number of books and e-books sold)