*This article is based on that of Atsuo Tanakafictional forest](Shinsensha) has been re-released. 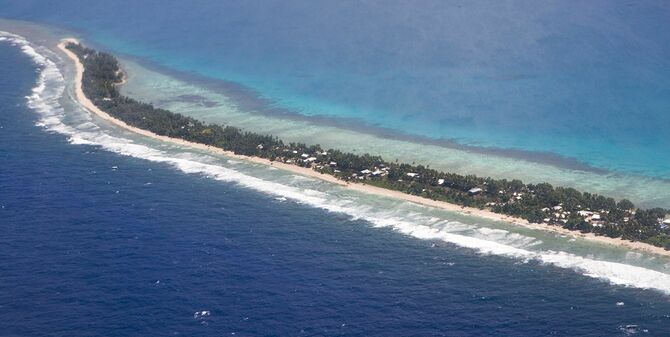 Tuvalu in the South Pacific. Submergence due to sea level rise is also a concern = 01 May 2009, Tuvalu

When we think of sea level rise, we imagine that rising temperatures will melt land ice in places like Antarctica and Greenland, causing seawater to rise.

But even more important is the expansion of seawater.

Common examples include thinning sand beaches, palm trees on the shore being toppled over by the waves, and waves starting to crash into houses.

Television often shows a scene in which locals stand on the beach, dip their feet in the sea water and say, “This was land before!”

Many cases have a direct impact on the lives of islanders.

For example, there are numerous reports that well water used for domestic purposes has mixed with seawater, that seawater has spurted inland during spring tides, and that small offshore islands have disappeared.

“The area of ​​the Tuvalu Islands” was actually increasing

Tuvalu, an island nation in the South Pacific, has become famous for rising sea levels.

Most of the country is made up of coral reef islands just 1-2 meters above sea level, and the whole country is said to be at risk of submergence due to rising sea levels. sea.

If the sea level continues to rise, the land itself will disappear and people may lose their place.

On the other hand, we asked Australia and New Zealand to accept environmental refugees (this was also rejected, and only a small number of them were accepted as labor migrants in New Zealand). Zeeland).

What will happen to Tuvalu? People who watched TV pictures earlier will probably be worried about this.

However, there is a surprising fact here. When I checked the Tuvalu area it was actually increasing.