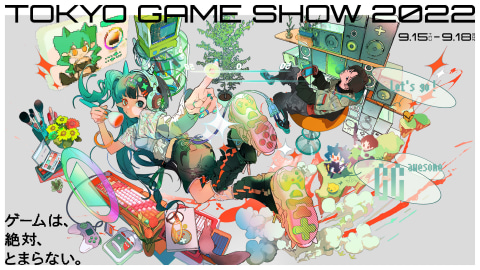 The “Tokyo Game Show 2022 (hereinafter referred to as TGS2022)” event sponsored by the Computer Entertainment Association (CESA) will be held from September 15 to 18 at Makuhari Messe.

TGS2022, which will be held under the theme “Games Never Stop”, will be a hybrid event with a real venue set up for the first time in three years. In addition to various exhibitions and projects in real places where you can enjoy the excitement and presence, there are also unique online projects that can be enjoyed all over the world, such as the official program distribution, TOKYO GAME SHOW VR, free game trial version, Steam special place. Many are scheduled.

Asuka Kijima has been named an official supporter. In addition to appearing on the official TGS program, on the TGS2022 website, you can touch various games and convey the appeal of the latest games.

A total of 1,409 securities were on display as of August 31. A wide range of genres are expected to be on display, including popular new titles, esports titles, and cutting-edge games compatible with the metaverse (virtual space) for various platforms such as home game consoles, smartphones, and the PCs.

38 official programs will be distributed during the four days of the exhibition. Of these, 29 were “official exhibitor programs” by exhibitors (26 participating exhibitors).

Also as a global event this year, the distribution will be done in collaboration with foreign platforms/media such as DouYu (China), bilibili (China), Douyin (China), HUYA (China) and IGN (USA, etc. ). You can also watch the program on the special TGS page on Steam. In addition, most programs will be conducted in Japanese with simultaneous interpretation into English.

* Schedule is subject to change

This year, in view of preventing the spread of the new coronavirus infection, we will limit the number of people in the hall, so tickets will be sold in fixed numbers for each day (online presale only). Therefore, in order for as many game fans as possible to enjoy TGS2022, general visitors will be able to enter on the afternoon of September 16, the second working day.

Afternoon tickets will also be available on September 17 and 18, which are open to the public. However, this year, in a bid to prevent the spread of infection, primary and younger students, including infants, are not allowed to enter even if accompanied by a guardian.

* Up to 4 tickets can be purchased per person.
* This year, primary and younger students, including babies, cannot enter even if accompanied by a guardian.
*General Tickets (Day Tickets/Afternoon Tickets) are only available for presale online in various game guides. No tickets will be sold on the day of the event
* Supporters Club tickets with benefits are sold out for domestic use on Saturdays and Sundays.