“Once the battle comes, I will show no mercy. No matter how many soldiers there are, I will show you how to fight in my own way.”

Son-in-law of TokimasaTomomasa Hiraga(played by Takashi Yamanaka)Masanori Hojo(played by Tsubasa Nakagawa) Shigetada, falsely accused of poisoning, returns to his hometown and prepares for battle.

I headed for persuasion to somehow avoid warHojo Yoshitoki(played by Shun Oguri) However, he replied, “If you think of Kamakura, who should you really fight? I’m sorry.”

NHK Taiga Drama”13 of Kamakura-dono“, the subtitle of the 36th show is “samurai book”. The confrontation between Hojo and Hatakeyama is finally inevitable, and Shigetada will be able to fascinate us with his last moment, never seen in the history of Taiga.

Shigetada Hatakeyama RebellionI’ve introduced (battle details) before, so this time I’m going to talk about Tokimasa, who was at the height of his power by destroying the Hatakeyama clan.ground(Performer: Rie Miyazawa) The Fall of the Couple”The Mr. Maki IncidentPresentation.

Riku “Let’s think of something fun”

I expect the line of the next notice to be to comfort Tokimasa, who will be banished to Izu. .

… The power of Tokimasaya can be fixed arbitrarily. This person’s wife, Maki’s wife, is a heartbroken person. Next, Shigetada is Tokimasa’s cousin. Additionally, Musashi Saemon Sagen Tomomasa (Tomasa) Ason (a son of Yoshinobu Hiraga) was also Tokimasa. Tomomasa is Maki’s son-in-law. Hatakeyama is the head of the Nii-dono (Ama Midaidokoro, Yoritomo’s backroom) Yoshitoki and his descendants, so if there is still a disagreement, people can slander. Also, Maki’s wife has something to think about. Shigetada was a peerless bow and arrow, and especially if it was someone who was the guardian of this shogun, thinking that person was his predecessor, Shigetada would laugh at him telling him about his cousin Saburo Inage Nyudo Shigenari Hoshi. went to the Futamata River in Musashi Province and defeated Shigetada on June 2, 1823. Sad thing too…

* From “Horyaku Kanki” Shigetada was punished (punctuation marks are added for easier reading, and kana → kana, old letters → new letters, etc. are corrected. Same as below)

Hojo Tokimasa eventually wielded power. His wife was an ambitious woman called Riku no Nyobo (Maki’s wife), and she plotted to get rid of Minamoto no Sanetomo and support Tomomasa HIRAGA, who was her real daughter’s son-in-law. However, since Sanetomo is protected by his independent son-in-law, Shigetada HATAKEYAMA, he decides to destroy Hatakeyama first. So Shigetada’s cousinInage of Shigenari(played by Seiki Murakami) and destroys Shigetada after a plot.

……Well, so far it’s almost the same as “Azuma Kagami”, even if it’s a bit short. First, he describes how he decided to purge Shigetada due to his ambition to “dismiss Sanetomo and bring Tomomasa to Kamakura-dono”. 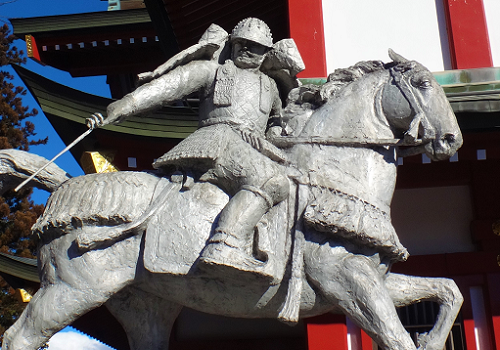 Now, this is the next move Maki’s wife made after taking out Shigetada, who was a nuisance.

…… On the 23rd of the same day, I summoned Shigenari and Shigetani, a disciple of Shirotani Shiro Shigetomo, and told him that I am Saemon Saemon (Tomomasa), who was in Kyoto at the time, and Tokimasa was appointed magistrate .Shikéri. If Iyo Nyudo Yoriyoshi is the last of the five generations of Iyo Nyudo Yoriyoshi Ason, what kind of details must he have to become shogun? If I say I’m going to lose my shogun, it’s the same as the Shigenari brothers.

* From “Horyaku Kanki” Shigetada was killed

【Free translation】On June 23, Maki’s wife met Shigenari Inage and his younger brother,Shigetomo Harutani(Hangaya Shigetomo) and conspiracy.
“My son-in-law (Tomomasa) is governor of Kyoto in the name of Hojo-dono, but it’s also because Tomomasa is the fifth-generation descendant of Minamoto no Yoriyoshi (the fifth-generation ancestor of Yoritomo). Minamoto clan. As the master carpenter, I think I have sufficient qualifications to replace Kamakura-dono.”
Therefore, he agreed to “lose Sanetomo”.

…… No, this reasoning is strange. It is true that Tomomasa is of the Genji line, and even if he is worthy of Kamakura-dono, it would be wrong to dismiss Sanetomo, the current shogun, who has nothing to do with it.

By the way, “losing” here means shogun or lifetime rank. In any case, Maki plans to assassinate Sanetomo.