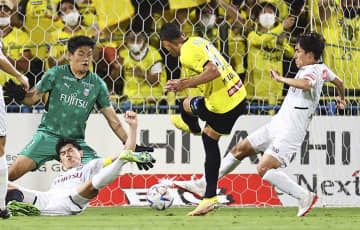 Kawasaki Frontale’s hope of winning three consecutive J-League Premier Division titles took a hit on Saturday as they were held 1-1 to Kashiwa Reysol. Yu Kobayashi’s first-half opener was canceled by Douglas in the second half at Sankyo Frontier Stadium Kashiwa, with the result leaving Kawasaki with 54 points, four behind leaders Yokohama F Marinos who play their game on Sunday. Reysol No.10 Matheus Savio fired just wide into the turn from the edge of the box midway through the first half, while Kento Tachibanada had a shot saved for Kawasaki from a similar distance before Kobayashi str.. .