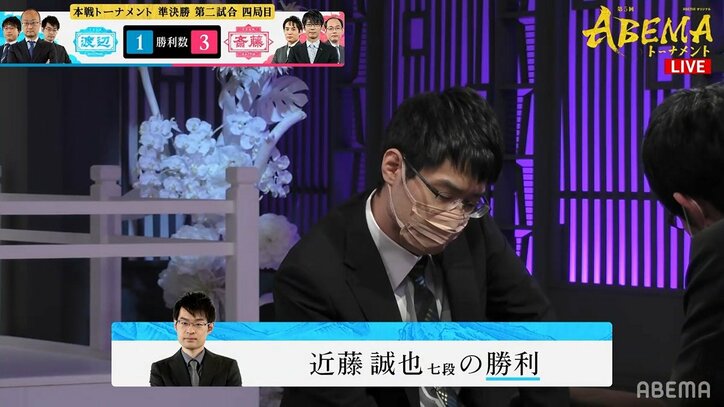 Team Watanabe and Team Saito, the 2nd semi-final match of the 5th ABEMA Tournament, a fast-paced team match in the world of shogi, was broadcast live on September 17. In the fourth station, which Team Saito won three times in a row from the first station, Team Watanabe and Seiya Kondo 7th Dan (26) beat opposing leader Shintaro Saito 8th Dan (29). The long-awaited victory where the team stopped the losing streak and the loss continued as an individual. Will the flow of the game change from here?

[Diffusion]Team Watanabe vs. Team Saito Battle for the Finals

Kondo 7th Dan, who thoroughly attacked Saito’s camp concentrating his forces with Ogoma and Kogoma centered in two lines, managed to break through and took the lead from start to finish. The attack continued to be intense and devoured, and it was pushed to the limit. After the match, Kondo 7th dan said with a smile, “First of all, I’m relieved to have won one. It’s kind of impossible, but it was a shogi match where the offense was going to continue, but it was a match. of victory.”

Moreover, Nobuyuki Yashiki (50), who acted as a commentator, said: “Kondo 7th dan attacked aggressively. With the rule of Fisher, it is difficult to accept that the offense is linked. As expected, Saito 8th dan can’t reverse the flow. . It’s become,” commented. There is no doubt that Team Watanabe, which was a bit lacking in energy, became a victorious victory.