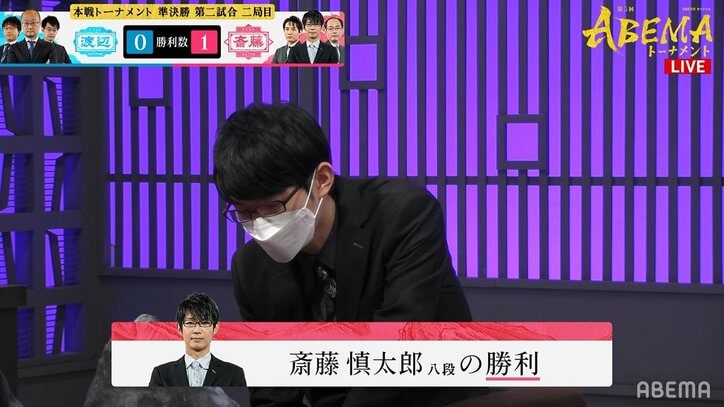 That’s what it means to be extremely sharp. Saito 8th Dan, who takes his time and dominates the board with his tenacity and endgame power cultivated in Tsume-Shogi in long matches such as the Class A match, took an aggressive stance in this match. Watanabe 5th dan on the first move left Mino, and Saito 8th dan on the back became Gangi’s aii tower, and Saito 8th dan took a clean step with good timing while staying on the ball. I made a dragon in the middle of the stage and took the lead and continued the game. Watanabe 5th dan also tried to come back with his incredible tenacity, but Saito 8th dan did not falter and is went straight into the final stage. It was a clear victory, filled with both strength and speed.

After the match, Saito 8th Dan said, “It was tough until I won. My friends also said that Kazushi Watanabe was tenacious. It wouldn’t have been strange for him to be knocked down, but I I’m glad I was able to do without panicking.” and a relieved smile. With his first qualification in the final, the leader gave the team even more momentum.