★ indicates the level that requires countermeasures.

* The pandemonium that can be obtained is only a fire attribute.

What is “Super Ultimate Sai”? What is different from the normal super ultimate?

“Super Ultimate Aya” is different from ordinary super ultimate,A stage with 5 “Super Ultimate” difficulty attributes will appear. (*Scene composition other than attributes is the same)
And each time you clear each step,You can get up to 20 “Fire Attribute Pandemonium” with clear speed rewardsis.

▼ You can challenge from any attribute stage ▼ If you clear it, 2 Pandemonium will be dropped as a reward (up to 20 can be obtained for each stage). * Appears all the time during the period.
* “Stock” and “Timeshift” are not possible.

* You can get it when you complete all stages as a single or multiplayer host. If you complete the stage eligible for the daily clear bonus, you can obtain 5 “Bewitching Demon Hall Demonic Pandemonium (★6)” once per day as a clear bonus.

* You can get the clear bonus even if you delete it as a multiplayer guest.
* If there are multiple target stages, you can get a clear bonus for each stage.
* If the total number of characters acquired in a stage exceeds 20, characters exceeding the upper limit cannot be acquired.

Bring a character that can handle gravity barriers and mines

In this questInstant kill mines (about 200,000 damage) and a large number of gravity barriersTherefore, both measures are essential.

Puyorin will appear and enemies with internal weaknesses will appear.Let’s challenge with 4 allies whose attack type is “Penetration Type”.

The more enemies you hit, the higher your attack power.

Hitting as many enemies as possible before attacking the boss will make extending the damage easier.

Recommended to use items that reduce HP by 10% ▼ Hayarin’s Gauge Attack Can Be Reduced Hayarin uses a gauge attack,Max HP reduction attack with 20,000 damageIt’s embarrassing to let go.
If you’re using an item that reduces HP by 10%, you can skip the first turn, making it easier to reduce damage. (*You can also use the fruit from the Military Lifetime Cup.)

Simultaneous processing is necessary as mages are mutually resurrected Mages in stage 2 and boss 3 resurrect each turn.

▼ Mage repeats the move center and left and right every turn When the two mages overlap in the center, use the teleport tunnel to move around the block and go back and forth to their weak spot to defeat them at the same time. 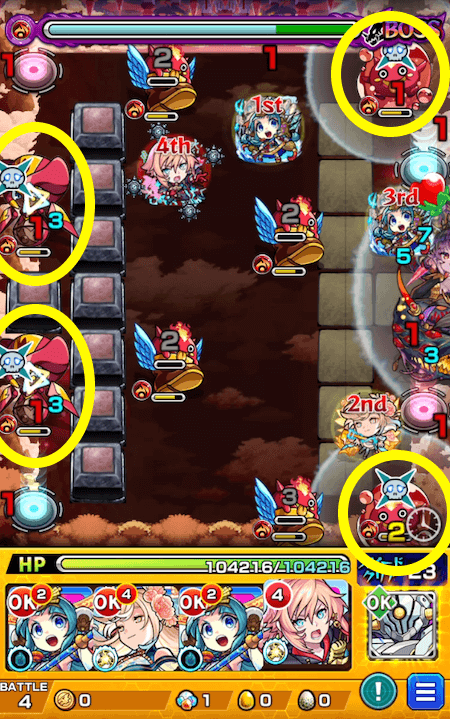 ▼ If you kill all the small fish with the cross skull mark, power failure and enemy placement change will occur. Defeating the small fry unlocks the boss transparency. Then move to a position where you can attack.

Boss 1 and 3 attack with attention to blocks

▼ Boss 3 has a block in the center

Blocks are placed hidden by the boss, so be careful when attacking.

▼ As a trick to damage the boss, get out of the teleport tunnel with the weak point and use the block to go back and forth to the weak point. “Waku Waku no Mi” which is useful for strategy

“Crest of the Soul” useful for strategy

（※）Note that this does not work on invisible enemies.

Here are the details of the attack of the small fish.Attacks to watch are highlighted in red.Note that the number of attack turns may differ depending on the stage, so please use it for reference only.

* The damage is of superior attribute and state without anger.(About the state of anger)

return to the table of contents