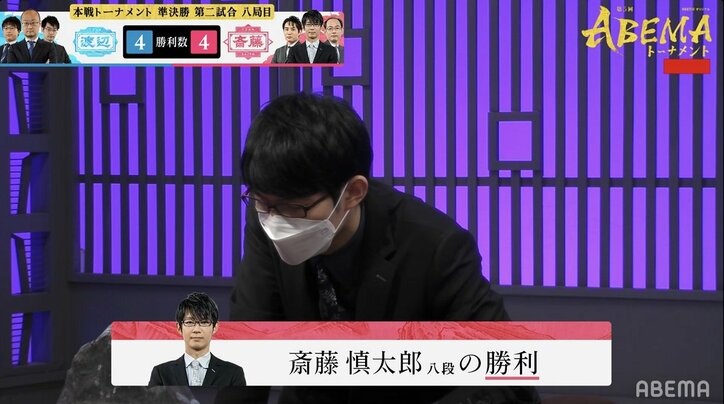 Team Watanabe and Team Saito, the 2nd semi-final match of the 5th ABEMA Tournament, a fast-paced team match in the world of shogi, was broadcast live on September 17. Watanabe team 4 wins, Saito team 3 wins, Shintaro Saito 8-dan (29) defeated Seiya Kondo 7-dan (26) at the 8th station. I overcame Kadoban and brought it to the full set.

[Vidéo]Team Watanabe VS Team Saito Battle for the final

This is the strength of a leader. The Saito team suffered from 3 straight wins to 4 straight losses. In order to pay off the debt of the 4th station that attracted the negative flow, Saito 8th Dan faced the 8th station of the same card saying, “I have no choice but to do this.”

First movement of Kondo 7th Dan from Yagura. Saito 8th dan aggressively attacked the match while playing second. With Keima’s progress, he attacked smoothly and overwhelmed the first player. He stopped the Kondo 7th dan saying, “I fell behind from the middle of the stage and the parts stopped working.”

When Saito 8th Dan, who had the upper hand, hit △2 Shichigin with a high-pitched sound, commentator Nobuyuki Yashiki 9th Dan (50) said, “I have never seen Mr. Saito’s hands so powerful. Saito is still calm. feel good?” he said surprised. There were many fan comments saying “rare” and “cool”.

Saito 8th Dan, who overwhelmed the first player with a strongman round to the end, defeated Kadoban and picked up a big win leading to a full set. After the game ended, he sent a hot beer saying, “I’m glad I was able to connect to the next one. I’m still saved by the team members, so I wish Mr. Kimura (Ichiki ) to go there in a good atmosphere. I have come this far, so I want to entrust him.”