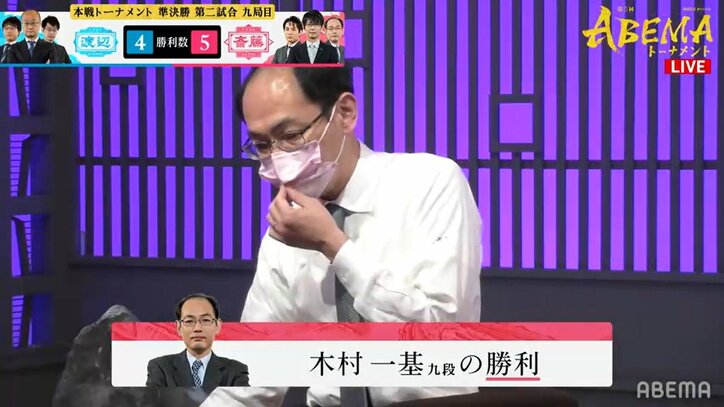 Team Watanabe and Team Saito, the 2nd semi-final match of the 5th ABEMA Tournament, a fast-paced team match in the world of shogi, was broadcast live on September 17. From the full-bodied victory of the leaders of the two armies to a fierce battle. In the final battle, Team Saito and Kazuki Kimura 9th Dan (49) won Team Watanabe and Kazufumi Watanabe 5th Dan (27). The Saito team decided to qualify for the finals for the first time.

Who could have expected this development? Team Saito got off to a good start in Game 2 of the semi-finals with three straight wins, but by Game 4, Team Watanabe took the lead with four straight wins in a stormy comeback. Team Saito, who were forced to turn the corner, were led by Shintaro Saito 8th Dan (29), who got up and took them to the full set with a tenacious victory.

Watanabe 5-dan and Kimura 9-dan were given the final game. Watanabe 5th Dan said, “I’m grateful to be able to perform on such a prestigious stage. I want to turn this moderate tension into strength.” On the other hand, 9-dan Kimura, who held hands with his teammates and received power, said, “As usual” and walked into the match with full enthusiasm.

Following the swing play, Team Watanabe is the first move. With the same map as the 6th Station, the battle pattern was again the start of the battle. Intense offensive and defensive battles, but the balance is maintained until the endgame. Watanabe 5th dan, like his previous fights, showed good tenacity while being pressed for a few seconds. The second team approached the first Katsura team, and when they got the upper hand immediately, they pushed and won. The commentator, Nobuyuki Yashiki (50), who was 9th dan, moaned: “He is good at adjusting the rhythm. He’s a veteran receiver.

As a result, Team Saito qualified for the finals with 5 wins. Kimura, 9 dan, who won the big match, said happily, “I’m happy. I was able to contribute to the victory and I was able to have a good fighting experience in the last match.”

In the last match, which finally arrives, he faces Team Inaba led by Yo Inaba (34). It’s the first time for the “Team Shin Angel” led by Saito 8-dan, but Kimura 9-dan and Sasaki Yuki 7-dan (28) are experienced players for the second year in a row. The leap of the angel finally reaches the final battle. Fly upward with momentum.

◆The 5th ABEMA Tournament The 1st and 2nd tournaments will take place in individual competition, and from the 3rd, it will take place in team competition of 3 players. 14 leading shogi players nominated 2 each at the draft meeting. The remaining Team 1 will hold a tournament of shogi players who have not been named, and the top 3 players will form a team and fight in a total of 15 teams. The game is played under Fisher’s rule, which has a time limit of 5 minutes and adds 5 seconds for each move. The teams will compete in the qualifying leagues and in the main tournament, with 9 out of 5 wins. The preliminaries are divided into 5 leagues with 3 teams each. The top two teams, a total of 10 teams, will qualify for the main tournament. The winning prize is 10 million yen.
(From ABEMA/Shogi channel)