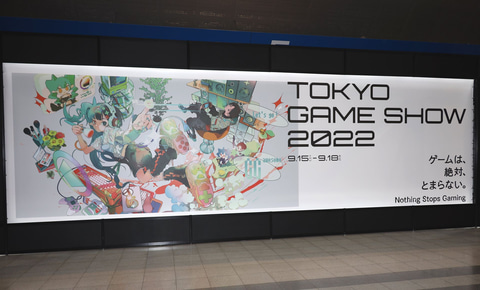 The Computer Entertainment Association (CESA) reported that the total number of visitors to the actual venue for the Tokyo Game Show, which ended on September 18, reached 138,192 over the four days. At the same time, the opening of the Tokyo Game Show next year was also announced. Scheduled to be held at Makuhari Messe from September 21-24.

This year’s figure of 138,192 is about half the number of 262,076 in 2019, the latest offline occurrence and all-time high of 298,690 in 2018. This may be due to the impact of the novel coronavirus, the decrease from foreigners or online participation, but originally tickets were sold with the upper limit set at 150,000 people. It can be said that the number is almost as expected.

Viewing of the official online distribution schedule and TOKYO GAME SHOW VR 2022 (TGSVR2022) will also be part of the Tokyo Game Show, and the total number of visitors will be announced later.

Incidentally, among general visitors, people involved in the exhibition and the press, the decline rate is high for the media, which was halved compared to 2019 despite the fact that there have no restrictions on tickets, etc. Continuing from last year, the number of foreign attendees has dropped sharply, and due to concerns about the novel coronavirus, each exhibitor will postpone a large-scale stage to avoid crowds, and instead focus on online distribution. . the media that can be consulted online have multiplied.