Article on the results of the first match 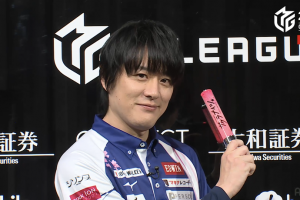 [10/7 M League 2022-23 1er résultat du match]Uchikawa brings the top to the Sakura Knights with 4 games in a row! Nakabayashi in his first match came second!

A Kobayashi of the lower house

Although cut, it is Tojo’s range statement tile

East 2 post 2 at home, Hori, who skillfully decides agari and continues to be the leader, reached in the 3rd round.

Tojo catches up and Dora

Tai’s hand became difficult after receiving a two-door reach, and he chased after Suji.

Tai is engaged in the East 2 station 3 house

Tanyao, Red 1 and Dora 2’s E-Shanten, Toujou pushed back, but Tai was the one holding the line.

Reach Red 1 and Dora 1 while waiting.

Kobayashi, the parent number in the same order

Wait for me, Tenpai. Ditch just before

I hit and get a chip given the possibility of losing a pair.

From the ditch as planned

was hit and became Kobayashi’s 1500 Agari.

In response, Hori tries to push back.

can be called, and it is also Tai’s actual product

Tai is the winner here.ditch

Caught and released the gun, and stood on top by a narrow margin with 8000 Agari.

In the East 4 station, Tojo, the parent number, attacks with range.

As if to show first position in win rate last season

Tsumo, and becomes Agari with 1300 oars.

I will wait and go out to fight.

Upon receiving this, Kobayashi is stuck. Tai’s actual product

was cut and the cannon was dropped into the moat.

With a card on the back, it was 8000 Agari, and once again Hori popped a head.

In the South 1 station 1 house, Tai, the parent number, is a seven-pair tenpai.

is caught and released.

4 consecutive shots of regret that caught.

South Station 2, good deal of tiles that allow to see 456 three colors in the moats of the parent number.

When you scream from Tai

However, Tai, who had put the tenpai in the mace, was in the ditch.

Kobayashi’s gimmick, which has continued to have a difficult development so far, shines in the 3 Southern stations.

I kinda want to add points, looking at Sei Isshiki and Tanyao

Hori was the one waiting. Reaching with Honitsu’s big hands and seven pair.

Kobayashi finished this station with Tanyao.

and connected hope with 2900 Agari.

South 3 station 2 home, parent number Kobayashi in the 11th round

Tenpai is waiting for the champagne.

Although the appearance of the tiles is often changed, it is not a trick that should wait for a change, so it is a quick range.

There are many people waiting for Kobayashi on the mountain, and in the final stage

South 3 station 3 home, Kobayashi again with a light gimmick to take the lead.

can only be lifted.

Dora that Kobayashi took out in Tenpai

The gap is pong.

A full tenpai enters the moat.

It was thought that Kobayashi had been shot, but upon reflection

Agari in the moat. With 8000 more points, he is closing in on Tai at the top.

Auras and Hori jumped to the top, Tai and Tojo were the boss, and Kobayashi was 3,200 points behind Tojo.

When the discarded tiles were about to reach the third row, Kobayashi got seven pairs.

Tenpai waiting for a single horse.

When you reach the reach, in one shot

It was Tai who won the long battle of 19 stations.

I brought a happy top to ABEMAS.

Sakura Knights managed to add a big point, and ABEMAS also consistently added points and finished the first week in the high ranks. The pirates had signs of a tough fight, but they persevered. Phoenix had a tough day with a 4th straight finish.

The four teams are now complete. The only player who has yet to participate is Katsumata from Furinkazan.