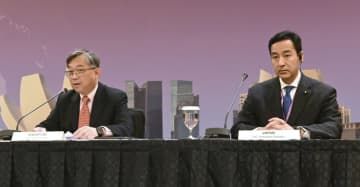 Members of a Trans-Pacific Free Trade Pact could agree in principle to allow Britain to join as a new member this year, using the European country’s case as a model for future aspirants, said Japanese Economy Minister Daishiro Yamagiwa on Saturday. Yamagiwa told a joint press conference, following a ministerial meeting in Singapore on the regional trade deal, that he believed that based on the views of some members, there could be a “maybe by this year” basis. Britain’s process of joining the 11-member pact, officially known as the Global and Progressive Agreement for…