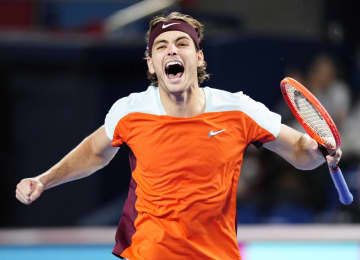 Taylor Fritz beat Denis Shapovalov 6-3, 6-7(5), 6-3 on Saturday to set up an all-American final with Frances Tiafoe at the Rakuten Japan Open. Third-seeded Fritz trailed 3-1 in the final set but roared to win the next five games, wrapping up the victory with his sixth ace of the game against his Canadian opponent at the Ariake Colosseum in Tokyo. Fritz won 82% of his first-serve points while converting four of his seven break points. “I tried to dig deep and do my best,” Fritz said afterwards on the pitch. “I was able to turn the momentum around at the end of the game and play som…